You are here: Home / Uncategorized / You Get Credit For Trying

In one of the Pirates of the Caribbean movies (I think “Dead Man’s Chest”) two pirates (Pintel and Ragetti) are rowing ashore. Ragetti, who has one artificial eye which pops out in various scenes in each of the four movies, is reading while Pintel is rowing. Pintel, who is always deriding and chiding the slightly dumber Ragetti barks, “Why are you lookin’ at that? You can’t read” Ragetti defends himself saying, “It’s the Bib 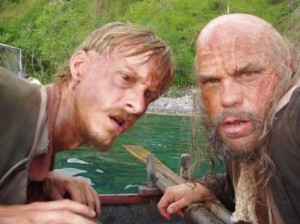 le. You gets credit for tryin’.”

I love that scene. My naïve spiritual imagination wants to think that this theologically problematic statement would stick in the totally depraved minds of non-believers and after seeing this totally non-spiritual production would be unable to stop those words from echoing in their skulls, “You gets credit for tryin’, You gets credit for tryin’.” They would then rush home, find that Gideon Bible they stole from the hotel last summer, and spend the rest of the night reading. The next day, they would text one of those Christians they have always despised and ask for help understanding what they have been reading. The end result would be a new brother or sister in Christ.